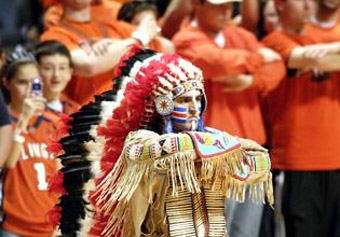 University of Illinois graduate student Dan Maloney portrays Chief Illiniwek at halftime of the Illinois-Northwestern basketball game at Assembly Hall in Champaign, Illinois, on Feb. 18, 2007. The dance was the UI mascot’s next-to-last performance after the UI board of trustees announced Chief Illiniwek would be retired. (AP Photo)

There are some controversial issues that I find I have no strong feelings about either way, until finally I find myself picking a side in the interests of whatever will fastest end the controversy, because I want the damn thing resolved already.

I was a student on the campus of the University of Illinois at Urbana-Champaign from 1994 to 1998. For that entire time, I was a staff member at The Daily Illini, the student newspaper. Also during that entire time, there was the tiresome, never-ending debate over Chief Illiniwek, the school’s mascot/symbol. (I have to be careful what I call it. Some pro-Chief supporters will chide me for calling it a “mascot” and point out that it’s actually an honorable “symbol.”)

Pro-chief means you were in favor of keeping the Chief. Anti-chief meant you were in favor of banning the Chief. Both sides heavily lobbied the UIUC administration for years. I can’t tell you how many countless stories and columns and editorials that our student paper ran through the years of my college life, covering both the pro- and anti-Chief positions. Like probably most college newspapers, we were a liberal editorial board, and our editorial stance was generally anti-Chief because of its disrespectful portrayal regarding Native Americans. Of course, supporters of Chief Illiniwek maintained that the Chief was a respectful, historically accurate portrayal of Native Americans and that those against the Chief were merely caving into a culture of Political Correctness.

To be honest, I don’t know where the truth lay. My gut feeling is that it was demeaning, but I have no research of my own to back it up. And frankly, I never cared enough to go looking. I just wanted it over with so I could see fewer pointless stories about it in the paper while I was doing page layouts. (You pick your battles. For me, this was not one of them.)

For many the issue came down to the Chief performing his halftime dance at the basketball and football games. The dance was performed by a student — usually white — who had earned the much-coveted job. It was sometimes likened to a minstrel show. I can’t say that sounded to me like an inaccurate description, but I’m no expert on historic customs. (The performance was cheered and booed in rougly equal measure.)

Still others wanted all references of the Chief removed, including the Illiniwek version of the UIUC logo. And the extreme of the extreme said that even the “Fighting Illini” name was unacceptable. Many, like myself, thought that was too far. The name is not offensive on it’s own. Certainly not like the nearby Central Illinois town’s “Pekin Chinks” — I shit you not; Google it — which was retired about 100 years later than it probably should’ve been.

The Chief was one of those issues that had been raging on for years if not decades, and it became quite clear to me around my sophomore year that it would not be resolved while I was still on campus. I left campus in 1998 and went into the working world. Still living in Illinois, I’ve occasionally read stories about the unending debate in the eight years since.

Last year, the NCAA forced the issue and then in March the university finally retired the Chief. The last performance was at an Illini basketball game in February.

My reaction: It’s about time. But my reaction is one born from fatigue over the issue and a desire for people to move on. The way I see it, the issue would continue to be a divisive one on the campus forever until a corrective step was taken. That step could only be banning the Chief.

Probably the only reason the Chief was not banned long ago was money. Staunch alumni who supported saving the Chief vowed to cease their annual contributions to the university if the Chief were banned. That’s probably why the university’s board of trustees always waffled on the issue — there was potential money at risk in taking the inevitable step. At least because the NCAA stepped in, pro-Chief alumni will not be forced to blame the school administration.

Last week (and this is what prompted this blog entry), “The Daily Show” aired a sarcastic segment on the Chief that did a somewhat amusing job of lampooning the debate, including a scene filmed in the popular bar Brothers, which when I was on campus was a bar called Mabel’s that featured live musical acts including Acumen Nation and Wesley Willis. But that’s a topic for another blog entry.

What’s my point here? That my feelings on this matter weren’t very strong, except that I strongly desired to not hear about it anymore. That’s a pretty lame reason for writing a blog entry like I’ve just written. Sometimes you have to follow the truth of the situation. I guess the truth to be found here is: Enough already.