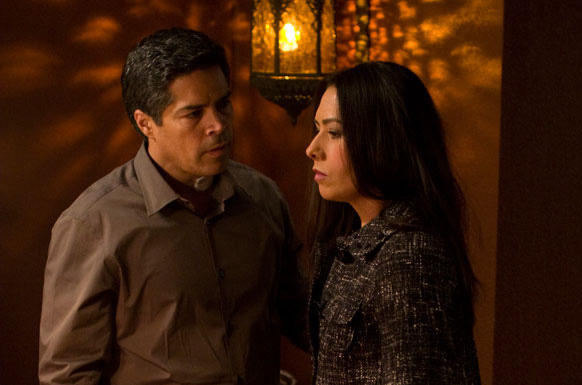 Caprica’s mob storyline reaches a turning point — one of several story strands that played out in satisfying fashion.

As previously alluded to, I will not be individually reviewing the final nine episodes of Caprica as I did the first eight plus the pilot, but I figured I would at least offer up some belated closing thoughts of the defunct Battlestar Galactica prequel, whose final episodes showed that this indeed could’ve been a compelling series. Based on how the first and only season wrapped up, I’d have been back to see more, had it been renewed.

The single-season, 17-episode run of Caprica (not counting the pilot movie, which would make for a total of 19 hourlong episodes), to me plays like a compelling argument for the 12- or 13-episode run typical of many cable dramas. In this day and age, with so many choices out there, with so many mediums of content consumption available to audiences and with their attention divided and their attention spans shortened, does it really make sense to do a TV series — and even more so, a TV serial — that spans 20 or 22 episodes?

Granted, you could make the argument that season one of Caprica could really be called two seasons with two arcs, but that’s not what Syfy or its creators called it — and more to the point, the stories being told here just didn’t warrant as many hours as were devoted to them. END_OF_DOCUMENT_TOKEN_TO_BE_REPLACED

Hello, fans of Jammer’s Blog & Reviews. Hopefully there are still some of you left out there. Long hiatuses can be bad for retaining your audience. One can at least partially ascribe the rating woes of Caprica to that reason after a mid-season break of some six-plus months. (Not to mention the very long time between the initial pilot movie’s release on DVD to when the series premiered in the first place. Syfy’s baffling scheduling of BSG and Caprica prolonged air dates at the expense of rational sense.)

So it was announced today that Caprica has been canceled by Syfy. END_OF_DOCUMENT_TOKEN_TO_BE_REPLACED

When Daniel’s deadline to deliver Cylons for the military contract is pushed up, he orders the U-87 be copied for mass production — a process that would mean the destruction of Zoe’s program. So Zoe attempts a desperate escape from the laboratory.

END_OF_DOCUMENT_TOKEN_TO_BE_REPLACED

Caprica review: ‘Ghosts in the Machine’

Daniel embarks on a psychological war of wills to coerce the U-87 into revealing that it contains Zoe’s memories. Joseph finds his mettle tested as he searches for Tamara in New Cap City.

END_OF_DOCUMENT_TOKEN_TO_BE_REPLACED

Caprica review: ‘The Imperfections of Memory’

Amanda is troubled when she begins having hallucinations about her deceased brother. Joseph searches for Tamara in V-World. Daniel learns a startling truth about the U-87’s MCP.