‘Discovery’ goes all in with poker, kickboxing

"All In" describes the subject, but not the spirit, of this week’s episode of Discovery. This is fine as a routine stopgap sort of episode, but the lack of ambition is notable. Fortunately, the lack of ambition is somewhat offset by the fact that at least there’s a solid character core here, even if that character core feels mostly redundant when considering what happened at the end of the previous episode. This episode is not strictly necessary, but then what episode of television is? (I guess it’s probably a problem if I’m waxing philosophic on the existence of all television episodes.)

When you consider the previous episode ended with Booker deciding to go with Tarka to pursue their forbidden mission to destroy the DMA, do you really need "All In" to explicitly show how Booker and Burnham come to grips with that realization and further affirm to each other that they’re committed to their positions? On the one hand, Sonequa Martin-Green and David Ajala do a good job of making me believe the emotional stakes of this relationship. On the other hand, setting this aboard an alien port amid the major set pieces of an Epic Cage Fight and a High-Stakes Poker Tournament feels a bit tropey. It’s like a TOS throwback hour.

‘But to Connect’ puts the discovery in ‘Discovery’ 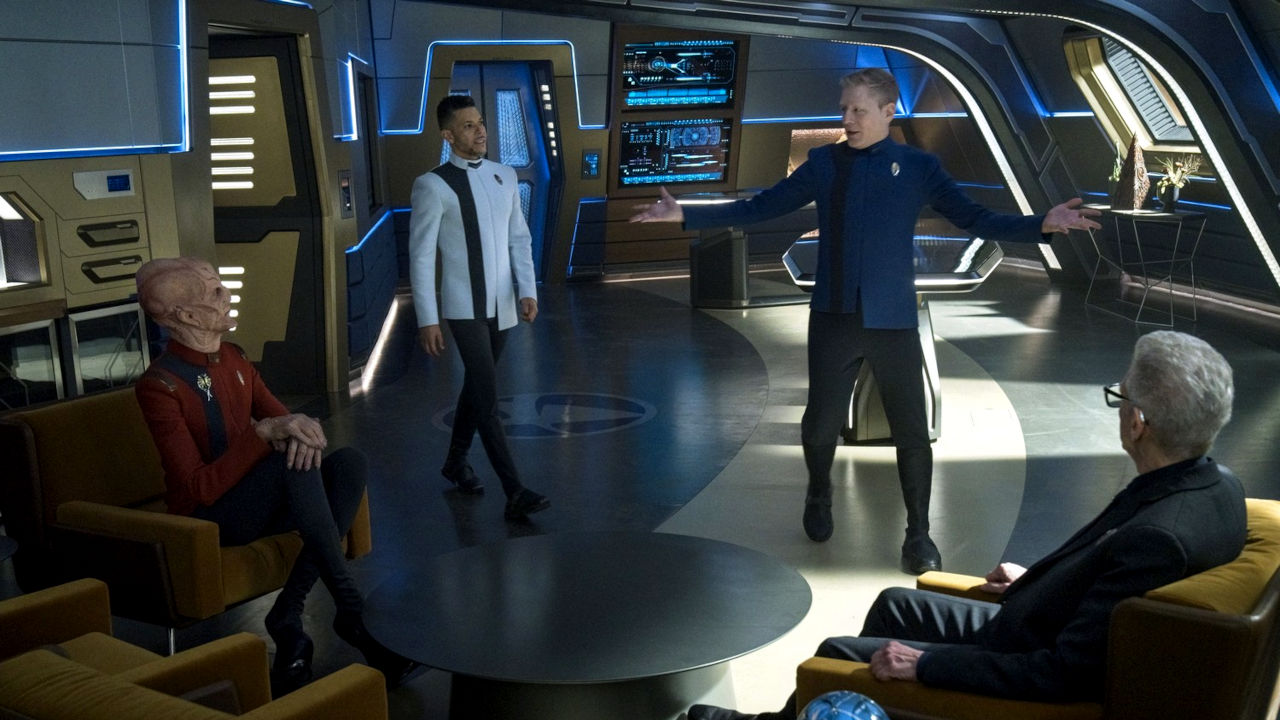 I struggled quite a bit with the idea of the ship unable to carry out key functions as a result of a crippling emotional crisis in "Stormy Weather." At the end of the day, it just seemed ridiculous, even wrong, that a computer that’s supposed to simply do what it’s instructed to do would fail in this particular way, on a show that’s always constantly mired in the emotions of its human characters. It was an annoying complication in a straightforward anomaly/mystery/jeopardy story that otherwise seemed to be on solid footing.

But with "But to Connect," I see everything now regarding Zora in a much larger and more impressive scope. This episode finally fully explores what I had hoped would be explored when the sphere data merged with the ship way back in the second season (and something it has been hinting around at ever since but without really committing the time to deal with): Zora as an artificial lifeform that has reached a level of sentience that can no longer be brushed aside by the plot. This episode started to win me over when it had Stamets arguing the same viewpoint I held — that having everyone’s lives depend on an emotional computer that could shut off the life support if it’s having a bad day is, well, a very bad and dangerous and untenable thing. (I was fully on #TeamStamets with his argument that they simply could not let this stand.) But what’s even more impressive is how the argument keeps going and introduces other points of view from the other characters, and how this episode persuaded me with these arguments while its characters were persuading Stamets. Good stuff.

"Stormy Weather" is a mysterious, focused, and claustrophobic sci-fi yarn that works pretty well … up until it doesn’t. This is a story about the crew working a single problem on multiple fronts. Meanwhile, the darkness of the rift (reminiscent of Voyager‘s "The Void" and V’Ger’s cloud from ST:TMP) and the unknown of what’s coming at the ship and whether the ship can escape, give the episode a tense, atmospheric quality.

Unfortunately, the episode started to fall apart for me once it became clear the path to escaping the rift was going to be charted through the emotional journey of Zora, the ship’s conscious (and now emoting) computer. It’s been a running joke for a while now that Discovery is all about the characters’ feelings. But with "Stormy Weather" it’s now even about the ship’s feelings. The ship is in crisis because of the negative effects of the rift’s strange properties, but it’s at even greater risk because Zora is so emotionally compromised that it (she?) can barely carry out core functions. Folks, our starship is a basket case.

‘All is Possible’ in the diplomatic community

"All Is Possible" is evidence that Discovery is trying. It’s trying to build out the universe, develop and empathize with its characters, and adhere to a storytelling philosophy that relies on dialogue rather than overblown action. It’s also, as I’ve said previously, trying to be the Trek show most in touch with its feelings. If you look back at the first season versus this one, that’s the most notable shift in priority. In order to be at peace with the universe, our characters must first be at peace with themselves.

That can make the show cloying and treacly at times, and this episode has its moments of that, but at least its heart is in the right place. "All Is Possible" focuses on three main storylines, with two of them being about a central character dilemma, and the third one being the most interesting and series-impacting with its focus on Federation politics.

"Choose to Live" is the best episode of Discovery in a very long time, since maybe "Die Trying." It works because it mostly keeps its stories grounded and straightforward, rather than excessive and overwrought, and puts forward sincere interest in them. Instead of shaking the camera for an hour while artificially employing emotional manipulation, it tells a reasonably good story and lets the emotional notes grow naturally from it. This is a major course correction that, while not a groundbreaking or stellar example of Trek, is a good example of it, and gives me hope that this season might be able to find its footing.

Stamets has a theory that the gravimetric anomaly, now dubbed the dark-matter anomaly or "DMA," might be a primordial wormhole, thereby explaining its ability to change directions spontaneously. I’m not going to pretend I think this makes any scientific sense, because I honestly don’t keep track of the sci-fi minutiae within Trek beyond its most core elements. But as long as they convince me the details are being considered by somebody in the moment and they try to explain them, I’m game. In this case, they make the case that Stamets is lacking the key evidence he needs for his wormhole theory in the presence of tachyons (which were a key clue to DS9‘s wormhole, so hey, there’s that). So he wants more scientific minds beyond the Federation’s to look into the possibility.