‘Picard’ season finale: The trial this time was personal

"Farewell" is pretty much season two of Picard in a nutshell. It’s trying to do a lot of things. It puts in some decent efforts to connect to its past. And it has some character moments that do work. But on the whole, as an hour (and season) of television, it’s a jumbled, anticlimactic mess that adds up to less than the sum of its many, many parts.

It’s simultaneously doing too much and not enough — too much plot and not enough story. It has bizarre Easter-egg mini-detours that go nowhere, and generally flails about like Chris Farley telling you about his van down by the river. It’s hard for me to hate an episode featuring Q, Guinan (the real one), and Picard reaching various emotional resolutions, but this (and the whole season) just doesn’t add up.

As season two of Picard lurches toward the finish line, the creators are able to deliver a fairly engaging payoff that tackles several aspects of the season-long storyline, even as they churn through a bunch of routine action sequences and needless detours in the process of getting there. "Hide and Seek" isn’t great Star Trek, but it’s pretty good season-two Picard, which I suppose is the problem. It’s probably the best episode since the second installment of this over-padded arc of a season, but it’s still not especially good.

This show just can’t stop getting in its own way even when it’s doing things right. There’s too much contrived silliness in here to make it something to recommend, even though there are scenes and ideas that I thought worked in the context of what we’ve seen this season.

Finally, some ‘Mercy’ in the season’s plotting

"Mercy" is a welcome step in the direction of plot coherence, where multiple threads of what has been happening for the past few episodes begin to converge in ways that finally start to reveal a picture that may not totally make sense but at least doesn’t feel completely random and haphazard. Finally we have most of the major players pointing toward a common direction, instead of isolated in their bubbles doing their own thing.

Still, though, other pieces (like Picard unlocking his mother’s room in the past) are missing or deferred, and the first half of the episode had me impatient, with its interrogation scenes that felt like they were ported in from the overplayed police procedural of your choice, and the scenes aboard La Sirena with Rios, Teresa, and her son, which frankly felt like a complete waste of time, despite the easygoing efforts Santiago Cabrera.

Things that go ‘Huh?’ in the night 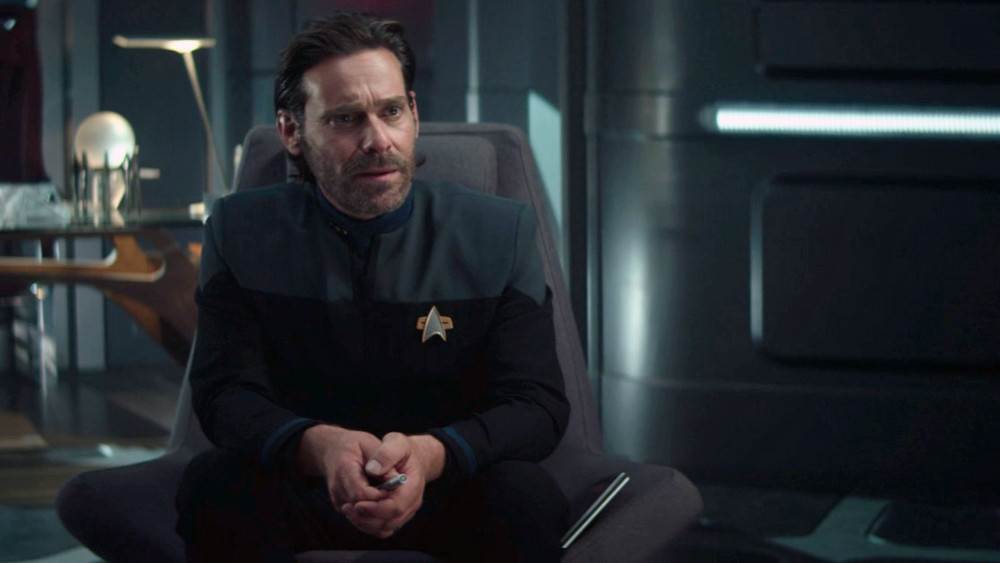 Things happen on an all-new episode of Star Trek: Picard.

That seems to be the best synopsis for many episodes this season. Lots of things happen. I have no idea how they relate to one other or make a compelling or cohesive tapestry (weak laugh), but, yeah, sure — things happen. Some of those things are reasonable. Some of them seem like confounding already-dead-ends conjured from the sky.

In "Monsters" we go into Picard’s mind, where he struggles with the troubling memories of his mother being dragged away that we’ve been seeing all season and possibly been making incorrect assumptions about. To facilitate this internal confrontation with the past, the comatose Picard has conversations with an ostensible Starfleet therapist (James Callis) who challenges Picard on his emotionally closed-off ways. There is some value here, and having two good actors just sitting in chairs in a somewhat adversarial face-off is at least worth something.

All dressed up with a long plot to go

It’s at this point in the season that the "10-hour movie" structure of this series is really starting to take its toll. There are some things to recommend here — notably everybody’s awesome red-carpet wardrobe — but they’re mostly overshadowed by the sinking feeling that all of this is a waste of this production’s time.

Consider the fact you’ve got Patrick Stewart on board for 30 episodes of this series to continue the story of Picard. You’ve got all the resources of the CBS/Paramount machine at your disposal. You could tell a couple dozen cool stories centered on Picard and his crew, preferably some of them even in the 25th century. Instead we’re spending, I’m guessing, an entire eight episodes in 2024, running around and chasing vague plot things in an overarching story that so far makes very little sense.